Top 10 Companies That Should Use Drones

Get support at a highly discounted rate. Signup for a support plan. 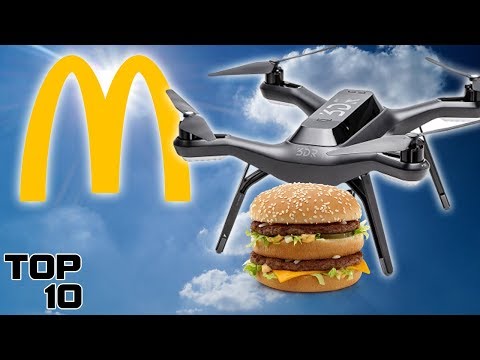 Top 10 Companies That Should Use Drones The first ever drone was actually back in 2002 which was used by the CIA for a strike that killed people in Afghanistan. Well now drones have evolved and the drones we are familiar with are not used for killing people. In fact we now use them to film videos with, and more recently companies have been using drones to help there business like Amazon. They are now making delivers using drones. So its time for other companies to also jump on board don’t you think.

So this right here is the top 10 companies that should use drones. Let me know in the comment section below what companies you want to see using drones. And If you guys like drone footage take a look at my vlog channel right over here I have just hit over 1,100 straight days of vlogging. Also I’ve meet like 100 of the top Youtubers on here if you want to watch those vidoes recently I met logan paul.

Ok enough of that lets get droning at number 10. We have of course McDonalds. Imagine ordering a Big Mac right from the confort of your home. Well actually just recently you can now Uber Eats McDonalds but it won’t be the same as using a drone. Uber eats I find has been a slow process it takes to much time for the food to get to me I don’t know if you guys have expierence that but some times you get someone on there bike biking so far to get you your food. This is why McDonalds should use drones. You place your order and boom a drone will get it to you within minutes. 2 Big Macs for me please. Number 9. We have Pizza companies like Pizza Pizza, or Dominos pizza.

Well actually It was just announced that Dominos will start using drones in New Zealand. Hopefully that is a success because that is just way to cool. https://www.youtube.com/watch?v=iZVANAnH2uI “ 0:09- 0:21” there will be times where I don’t even want pizza but just watching pizza or any type of food flying towards you just makes you want to order it. This will up the sales for pizza companies for sure.

Alright number 8 we have, eBay. eBay has become the biggest platform to buy products from. eBay has been around for almost 22 yrs now which makes them quite young, but this is a multibillion dollars business that operated in about 30 countries. It seems like you can buy anything from eBay these days so why not be able to order something that you want and you can have it droned to you. If you want to order a dog from ebay boom here you go https://www.youtube.com/watch?v=FTKC7trhRdI 0:00-Ok maybe ebay wouldn’t want a flying down in the air what if something bad happens. Lets move on. Number 7. What if Taxi’s uses drones or Uber. Uber now has self driving cars on the road. These cars still has a someone behind the wheel but these cars are now driving people from point a to point b so why not have a drone vechile taking people further faster. https://www.youtube.com/watch?v=JkIc2Y5gKYM 0:55- just imagine getting picked up in one of these things of course it would be a 2 seater.

(1:27- 1:32) Moving into number 6 we have news stations they should be using drones. Why sent a guy up in an expensive helicopter for weather reports, when all you have to do is sit in your boxers with some Cocopuffs while your flying a drone. This drone can capture 360 of the traffic and it will cost way less than using fuel for a helicopter and always having to rent one or it will for sure save you the cost of buying one.

I actually went onto eBay because I was curious if they sell Helicopters on there and I found this Helicopter Gearbox for 750 thousand dollars what the heck is it. http://www.ebay.ca/itm/VR-14-HELICOPTER-GEARBOX-MI-8MT-MI-14-MI-17-/202003678591?hash=item2f085b857f:g:qp8AAOSwhkRWgFm9 Also I did find a helicopter you can buy here was one for 165 thousand dollars, I read the description and it says there are some missing parts.

And shipping is only 100 dollars and 32 cents something seems fishy. http://www.ebay.ca/itm/Turbocharger-Eurocopter-MBB-Bo-105-Helicopter-helicoptero-helicoptere-/282476082616?hash=item41c4e2f5b8:g:YaIAAOSwa~hZaXjg&vxp=mtr Number 5. Facebook should use drones if they are not already. Google and Amazon are large companies already using them for business. Mark Zuckerburg the CEO of facebook has been talking about creating an infrastructure to help connect the world to internet. Mark Zuckerburg wants Africa to have free internet so why not fly a really big solar drone over Africa that has wifi capability on it. The drone being solar would make it never die and if you fly it high enough gravity will take its toll which means you don’t need that much energy to keep it in the air and you can grant internet access to a country that needs to catch up with the rest of the world.

The internet has become a very powerful and much needed place for information. Ok number 4. Farmers should be using drones this would make their lives so much easier Why you ask. Well Farmers always have to monitor their crops and also monitor to see if animals are getting into there crops. Well why not again eat some coco puffs and survey the land using the Drone cameras installed on it. Why not create a drone with censors on it. Make the drone start up when there is movement so when an animal comes near it the drone just starts flying in the air capturing what animal it is. That way the drone has a chance to scare the animal away this is like a scar crow and also it will alert the farmer of an animal and they can deal with the situation. Don’t you guys think drones would make a farmers life more eaiser they work so dam hard. Moving to number 3 we have us. I think resident of houses should be using drones as a surveillance feature. Security companies should use drones as a safety thing in homes.

So Just like the famers imagine if we programs the drone to turn on with motion. So when someone breaks into your house the drone turns on alerts the police and starts filming what is going on. And that footage can be seen from inside your house and also the police vechile. This drone would follow the person who is trying to break in until they are caught. There would be no way to outrun technology and something in the sky police could be able to catch the right suspect every time and quickly as well. There would be no point in trying to break into peoples houses anymore if everyone owned one because you would be caught 100 percent of the time. Alright number 2. Police officers should be using drones if they are not already this is because drones are an easy way to find suspect if they are on the run. Drones are very fast and they can get to places vehicles can not also you can lock onto a target.

So where ever the suspect goes this drone will follow until the suspect is arrested. Also what about for search and rescure. The drone is able to cover a whole lot more found than police officers running on feet. This will also save cost on using helicopters for a rescue mission. Finally at number 1 we have, Real Estate. We all know how effective pictures online can be in us deciding weather or not we want to buy a property.

I know for me when I am house hunting I look at pictures online first and if the pictures suck I just pass on them. But imagine if real estate agents are using drones to take proper pictures of the property. If I can see how big the land is it might make me want to buy the property. Also the type of videos you can use to sell properties is just un real. Using a drone you can also film the neighbourhood because this Is important to a lot of people. Well there you guys have it. Thanks for watching I will see you all in the next video..